So I canceled my subscription to Star Trek Online today. I just have not been playing it enough, between Rift and the dungeon runs I'm doing in WoW with RL friends. Much as I am going to miss the idea of having adventures with Rowan and Locke, the truth is I haven't been playing very much. I may still write some stories starring one or other STO crew, but for now they're on hiatus. 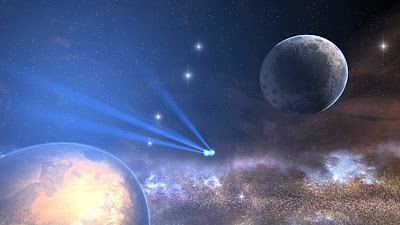 From the mind of rowanblaze at 5:52 PM 2 comments:

Email ThisBlogThis!Share to TwitterShare to FacebookShare to Pinterest
This ramble relates to: Locke, RL, Starblanket, STO

So a discussion developed on Twitter yesterday over what it means to roleplay in an MMO. I got into a fairly lengthy debate with Scott of Pumping Irony over what turned out to be a difference in use of words rather than a difference of opinion. I only realized this upon looking back over the Twitter feed to research this post. Please note, Dear Reader, that I have edited some of these tweets only to sift the wheat from the chaff or for grammar.

I had made the comment, "Most of my MMO avatars have backstories and personalities different than my own. Do I portray them all the time in game? No. . ."

To which Scott responded, "To split hairs: an avatar represents *you* so why would you RP it? An RPG character however, is not you, and open for RP."

I interpreted this to mean that Scott didn't think he could roleplay in MMOs, partly because of a previous tweet. "CPUs can't RP." This interpretation was reinforced when I asked, referring to PnP RPGS, "So y'all had conversations in character and made decisions solely based on roled personality?" and Scott responded, "Actually my first 3 months in [Star Wars Galaxies] -- YES! I did exactly that because I came from heavy RP tabletop & didn't know better."

I was mistaken however, having missed this interchange between Scott and Petter of Gamereactor. Petter asked in response to Scott's splitting hairs about avatars, "Are they? That gnome in WoW looks nothing like me, often it's just a character I control. Or am I jumping into something again?"

To which Scott answered, "No, you made my point. It's a character not an avatar."

At this point, without knowing it, I entered into a (mostly) three-way discussion with Scott and Maxwell of Phentari Press over semantics. It turns out that Scott RPs in his head (I think), while playing MMOs, much as I do. The hang-up was more over my use of avatar as a synomym of character in the context of RPGs in general, and computer-based RPGs in particular. Scott's distinction between the two terms is an interesting one to me, particularly because I became a gamer in mid 2006, when those two terms along with "toon" had become synonymous to many players during the rise of MMORPGs. Ysharros has a similar problem with the use of toon instead of character.

Scott doesn't consider characters to be avatars. Both Maxwell and I took the stance that; regardless of whether the character resembles the player in appearance, personality or values; it does represent that player. I also proposed the converse, saying the player represents the character in the real world. Scott disagreed, "If I create the character, personality and make my choices based on that, it's not representing me at all. It's a character."

For my discussion, avatar can be defined as a movable image that represents a person in a virtual reality environment or in cyberspace. Character can be defined as the combination of traits and qualities distinguishing the individual nature of a person or thing or a person represented in a play, film, story, etc; role.
So an avatar is something that represents, and a character is something that is represented. I feel that the characters I play are a projection of me into the game world, even if that projection's "combination of traits and qualities" bares no resemblance to me. Perhaps the two words are not synonyms but metonyms, words interchanged because the concepts behind them are related. We could even say, in the case of CPRGs, that avatar is a synecdoche of character, because you can't play a character in a computer game without a graphical representation of that character.

Part of the Twitter discussion also included the proposal that actors performing in a production are not the characters they play, and may even choose to play characters fundamentally different from their own personalities. As Scott said, "That's akin to saying every actor who plays a murderer has the values of a murderer." While I agree with this assessment, I believe it to be a flawed comparison, because actors' roles are largely scripted. They do not make decisions for the characters the way roleplaying gamers do. It could even be said that the actor is the avatar of the character he portrays; that is, the physical representation of the character created by the writer. Also, having seen many interviews with actors who do play sinister characters, they do actually enjoy "playing" the role of someone with a radically different mindset from their own, to understand or even "become" that character. I believe Roleplayers do the same thing when they choose the assassin. It is a safe way to explore a different mindset.

I have previously, and often, set forth my own ideas on roleplaying and character development. In the end, I realized that Scott and I were basically on the same wavelength. Both of us roleplay in our own way whether online or around a table with friends (I have never done this, but am interested). Interestingly, Scott himself pointed out that most PnP RPGS don't include rules for roleplaying as a progression mechanic, either; though some DMs, such as Elementalistly of Lowered Expectations, do give out points for good roleplay.

This was what I got from the conversation. Lest anyone be offended by my post title, it was I who had missed the point. I encourage Scott, Maxwell, Elementalistly, Petter, and everyone else involved in the Twitter confab, to post their more complete thoughts here, or at least post the links to your own blog posts on the the subject. I'd love to hear from you.
From the mind of rowanblaze at 4:42 PM 4 comments:

Email ThisBlogThis!Share to TwitterShare to FacebookShare to Pinterest
This ramble relates to: controversy, Nerd-rage, Roleplaying

I Dun Thin' That Word Means What You Thin' It Means

I read Elementalisty's thoughts on "dynamic" games. Read his post first. While originally commenting on his blog, I decided to post here, as I have been neglecting the blog for a bit.

According to dictionary.com:  "dynamic" is defined as "pertaining to or characterized by energy or effective action; vigorously active or forceful; energetic." Further definitions and etymologies of "dynamic" use the concept of "force, power." I think the connotation of "dynamic=change" is rooted in the word "effective" in the dictionary.com definition. If an action is effective, you'll see the effect after the action is over. If there is no change, then the action is--by definition--ineffective.

Now, of course rifts change the way you play, and may even affect tonight's plan for questing in a given area. But I think most people who are whining are hoping/expecting something fairly permanent about the effects of the rifts and invasions. The effects of the rifts are gone within minutes. I think this expectation is unrealistic.

Is this any better than the phasing system currently used in WoW? Or systems in place in other games? I think the permanent change expected by some players when they say "dynamic" is shortsighted. They don't realize that it means they might not get to do some of the things that players who passed by just before got to do. Perfect examples would be the recent River of Souls event in Rift or the opening of the Gates of Ahn'Qiraj. Talk about dynamic. Only one person on each each realm in WoW got the open the gates, and after a time, even new realms had the gates already open. The River of Souls phases 2 and 3 lasted about an hour total, then were over. How's that for dynamic? But people complained--justifiably--that they didn't get a chance to participate.

Single player games literally pause whenever you stop playing. The virtual worlds of MMOs roll on whether socially/player-driven or environmental/developer driven. I have said it before, I like that stuff slowly evolves while I am away from the game, for a day or a month. Otherwise I would stick with SPRPGs.
From the mind of rowanblaze at 11:00 AM 3 comments: