A fellow Secret Worlder going by the name Yuuko Shirakawa is soliciting In-Character interviews for her. Since I have a Twitter account for LoneStarBelle, I offered to participate. The transcript of the interview follows. You can find other interviews and other examples of Yuuko's TSW-related fictional work at Xencraft's Pastebin. 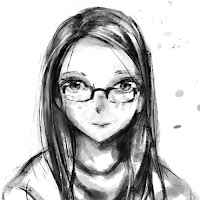 Yuuko: (fumbling with the camera before mounting it on a tripod. Before adjusting the focus on the camera and clearing her throat) This is Council envoy Yuuko Shirakawa, agent of the Dragon, and historian for the archives in Dublin, Ireland. As part of the Chronicles initiative, I am interviewing active agents from the 21st century so that future generations may better understand the context in which events are taking place. This session is being recorded on 03-30-2016 in Greenfield Ireland, at the Green residence.

Yuuko: Could you please state your full name, date of birth, affiliation and rank. 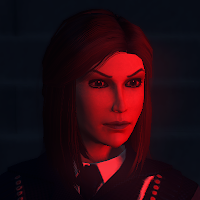 Dr. Hawthorn: Samantha Jayne Hawthorn, PhD. I am sometimes known as “LoneStarBelle,” but you can call me Sam. Let’s just say I was in my late 20s when I was recruited into the Illuminati, where I currently hold the rank of Visionary, though that really only means KG doesn’t mess with me anymore.

Yukko: Can you tell us about your family?

Sam: We’re not super close, especially since I moved to New York. My mom lives in the Hill Country region of Texas; Dad passed away a few years ago. I have an older brother and sister, both of whom live in Dallas with their families.

Yuuko: Where did you grow up?

Sam: Since my dad was in the U.S. Army, we moved around quite a bit when I was a kid. But mostly Texas, with a chunk of my teenage years based in Germany.

Yuuko: How would you describe your childhood?

Sam: Well, I was quite a tomboy. I loved comic books, hunting and camping, going to the shooting range with my dad. It wasn’t until I was older that I became interested in History, which is what my degrees are in.

Yuuko: How were you first introduced to the secret world?

Sam: I started having strange dreams, and discovered I had a power I had never heard of before. It wasn’t long before I got a visit from a fast-talking huckster, who turned out to be a representative of the Illuminati.

Yuuko: Did you have any contact (either directly or indirectly) with your society before your powers awakened?

Sam: No. Ironically, I wrote my dissertation on the Templar Order. At least, the Templars acknowledged by history. I was actually really upset when I discovered they are still operating and failed to contact me before the Illuminati.

Yuuko: Does anima sensitivity run in your family or are you the only one to develop powers?

Sam: As far as I know, I am the only one. Certainly no one in my immediate family has any apparent connection to the Secret World.

Yuuko: Can you tell us what a normal day looks like for you?

Sam: I’m actually semi-retired from fieldwork. I was originally recruited into Documents Acquisition, collecting rare tomes and parchments where they are in hazard zones, or sometimes simply if the Organization has an interest in them. However, now I spend more time in the Archives, cataloguing, researching. Boring stuff I suppose, but I love it.

Yuuko: Has your work for your society ever brought you into contact with anyone who would be considered historically significant (world leaders, celebrities, scientist and engineers.)

Sam: I can’t say that my *work* has ever put me in the same room with anyone famous. But Lumies do throw great parties, if you know what I mean.

Yuuko: Have you ever seen an event reported in the media and known that it was a lie and if so can you tell us what really happened?

Sam: Let’s just say that Daesh didn’t manage to destroy everything of significance in Palmyra.

Yuuko: What was the last event you can remember that shook both the secret world and the mundane equally?

Sam: Events in the Secret World spillover into the mundane with alarming regularity. It’s a testament to the abilities of the Societies that most of it is played off in the press as terrorism or natural disaster, or contained outright, with the general public unaware anything has happened.

Yuuko: Have you ever participated in an event considered historically important to the mundane world and if so was it on behalf of your society

Sam: That depends on what you mean by historically significant. Despite my background, I tend to work with people trying to make sure events that might be worthy of inclusion in a history book don’t occur.

Yuuko: Thank you for taking the time to speak with us, Dr. Hawthorn.

Sam: Thank you for the invitation. Ireland is lovely this time of year.

If you are reading this post through RSS or Atom feed—especially more than a couple hours after publication—I encourage you to visit the actual page, as I often make refinements after the fact. The mobile version also loses some of the original character of the piece due to simplified formatting.
From the mind of rowanblaze at 9:00 AM No comments:

My goodness! It's been, like, two and half weeks since I posted. Busy, busy, IRL. The big gaming news of the past little bit seems to be the cancellation of EverQuest Next. I can't say I am too surprised, but it is a disappointment. While I never played the original EQ, and only dabbled in EQII and Landmark (which I also "invested" in), I was looking forward to seeing the StoryBricks concept in a polished game.

But enough about that. What I have been doing for the past couple weeks, besides neglecting the blog, is playing a bunch of SWTOR (no surprise there, either). When Scooter can get involved, we're working on our Team Jedi, currently en route to Hoth. My Baldrvar is delightfully Dark, while Scooter's Vireena is only the Diet Coke of Evil. (Don't tell her I said that.) 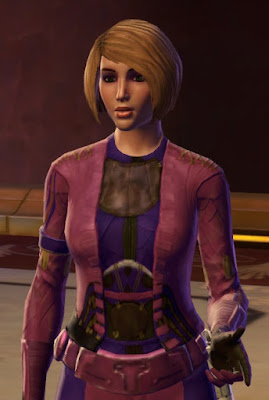 SPOILERS (for a 4-year-old storyline)

As an aside, I wish that (1) Sith light armor wasn't so uniformly goofy, and that (2) gear did not change appearance between the Imperial and Rebublic side. I wanted to keep Valerija in a short jacket, but the only one I could find was the one you see in the pic, a level 7-ish piece. There are plenty of medium armor jackets for smugglers that would fit the bill nicely, but they literally change to Agent garb when viewed on the Imp side.

When I'm on my own, I've gotten caught up in my Light-side Sorcerer's story. Valerija came to the realization she was being groomed as more than just an apprentice by Darth Zash. (What, the haircut didn't give it away?) And with the help of Khem Val, the Dashade, she sprang Zash's trap, with unexpected consequences for all of them. 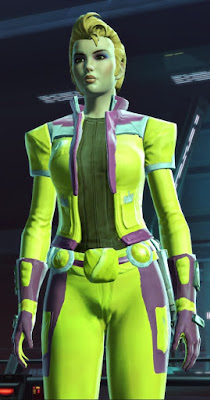 With the first chapter of her Sith career over, Lord Valerija (or is it Lady?) decided it was time to shed the resemblance to her former master (mistress?) and stepped out in a big way.

There are a couple other adaptive armor jackets I would have preferred, but they are out of my price range. This is Theron's jacket, dyed Yellow and Deep Pink. Njessi will probably kill me. I also had a bit of buyer's remorse over the pompadour, but after playing through a few cutscenes, I think it fits my newly independent darkangel. 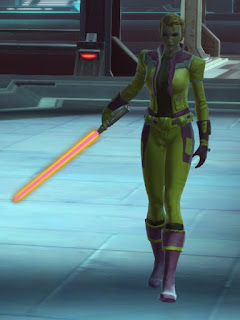 She may be attempting to reform the Empire with the Light, but Valerija is no pushover. That bubblegum-hued lightsaber cuts just as deeply as any red, green, or blue one.

And she can toss lightning with the best of 'em. 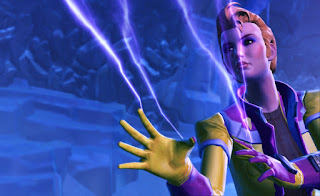 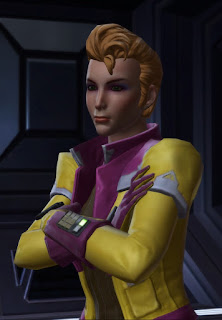 That's not to say Valerija doesn't have a sense of humor. Her motley band of pirates, archaeologists, fallen Jedi and Force-eaters keeps her amused and bemused all at once. But she'd do anything for them, and thus, has gained their undying loyalty. Loyalty that she'll need in the times ahead, as she pursues Darth Thanaton across the galaxy.
~~~~~~~~

If you are reading this post through RSS or Atom feed—especially more than a couple hours after publication—I encourage you to visit the actual page, as I often make refinements after the fact. The mobile version also loses some of the original character of the piece due to simplified formatting.
From the mind of rowanblaze at 6:14 PM 2 comments: