Skiffing About in Guild Wars 2

The need for this is probably long past now, as skiffs have been available since the launch of EoD in March, and were probably on display during some beta or another. However, reading back through a couple of posts and comments from last year, I came across one from Bhagpuss, wondering how the system would be implemented: 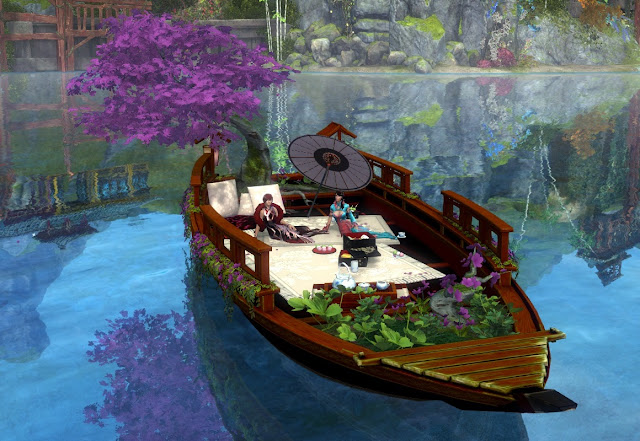 Bhagpuss: So the Skiff is officially a mount, is it? I figured it would use the mount system but I was hoping for something a bit more genuinely "boaty".

The TL;DR answer: Not exactly a mount; I think it's pretty boaty.

Unlike the rest of the mounts, the skiff is accessible from the left side of the skill bar, along with fishing and the jade bot personal waypoint (another quality of life mastery item). Once clicked, the skiff silhouette shows at the cursor point, in red if the drop location is not deep enough to launch the skiff.

Once launched, you must board the skiff using the interaction key (typically F). This may involve getting your feet—or more—wet to reach the launch point. The skiff holds the skipper and up to four (4) passengers. Said passengers can improve the performance of the skiff by performing emotes that are available on their skill bar, things like laugh and wave. They can also help improve the fishing ability of the entire party based on the number of fish caught during the fishing trip if the skipper has the fourth level of Skiff Mastery: Fishing Party. Passengers do not need this mastery level to gain a fishing bonus, but it increases if they do.

Once you are aboard your own skiff, the skill bar displays the skiff controls. From left to right, there are three basic speeds, depth charges for disabling hostile water creatures, a turbo boost using the Endurance resource (the yellow arc above the red health circle; replenished faster with the passenger emotes), a fish finder, and finally the anchor. Headway and rudder are controlled the same way as normal motion controls (keyboard, mouse, etc.), but it handles very much like a boat. You don't stop immediately upon releasing the button, but coast a bit based on your speed (including turbo). Turns are also wider at higher speeds. You must come to a complete stop before you can anchor. If you disembark without anchoring, the skiff dissolves and you'll be swimmin' with the fishes. If you time it right, you can disembark straight onto the shore, but you can also run aground. Once anchored, you must "disembark" to move about the skiff and to fish.

The basic skiff that everyone gets as part of the story is the Fishing Skiff, shown below. I can't remember if it is "on loan" to your character or is given, but like basic mounts, it's a bit worn and not at all fancy. If you bought a Deluxe or Ultimate Edition of the expansion, one of the perks was the Shing Jea Dragon Boat, a fancier skin shown directly above (dyed to match Heide's outfit). Of course, this being GW2, other fancy skiff skins have come available for purchase in the gem store, like the Floating Garden Scooter purchased recently for her characters, shown at the top of the post and currently available as of this writing. Interestingly, the skipper doesn't physically steer this one.

So, how do I like the skiff? As I said above, it handles pretty much like an actual boat, so points for accuracy. Of course, ANet has become somewhat renowned for the uniqueness of their mounts. They all handle differently to serve niches in your transportation needs, rather than simply being a faster way to get around. Skiffs are fun to get around on, assuming you have a body of water large enough. Some fishing nodes require them to access, but fishing is a whole 'nother post to worry about. Are they otherwise necessary? Not if you have a skimmer mount, for the most part. (Which you can use to relaunch the skiff if you accidentally bail out in the middle of the water. DON'T ask how I know.) But skiffs are a fun addition to the game and the world.
~~~~~~~~

Scooter proofreads almost all my articles before I post them, for which I am very grateful. However, any mistakes are mine and mine alone (unless otherwise noted). If you are reading this post through RSS or Atom feed—especially more than a couple hours after publication—I encourage you to visit the actual page, as I often make refinements after publication. The mobile version also loses some of the original character of the piece due to simplified formatting.
From the mind of rowanblaze at 3:14 PM 1 comment:

Email ThisBlogThis!Share to TwitterShare to FacebookShare to Pinterest
This ramble relates to: ArenaNet, Blaugust 2022, GW2

Greetings Traveler!
I thought I would write something to do with this week's Blaugust theme, which is Blaugust itself. Chances are, if you're reading this, you already have a good idea of what Blaugust is. But you may be wondering why I, an intermittent blogger of late, might choose to participate or promote it.

There's more this way »
From the mind of rowanblaze at 8:54 PM 2 comments:

Email ThisBlogThis!Share to TwitterShare to FacebookShare to Pinterest
This ramble relates to: Blaugust 2022, Blogging

Greetings Traveler,
I'm a little late to the party, but maybe I'll catch up on the weekend. So anyway, it's that time of year again, the one where Rowan actually attempts to blog again. That's right, the blogging frenzy known as Blaugust.