Greetings Traveler,
I'm a little late to the party, but maybe I'll catch up on the weekend. So anyway, it's that time of year again, the one where Rowan actually attempts to blog again. That's right, the blogging frenzy known as Blaugust.

I'm not sure how this will turn out, to be honest. My career has taken me from being a "front line" trainer to more of an instructional designer, part of a team producing web-based training. While it is interesting work for the most part, a lot of it involves writing, and it's hard to have writing as both a profession and a hobby. At least for me.
I see that my last post involved a beta test of the Guild Wars 2 End of Dragons expansion. As you may know, Dear Traveler, EoD was finally released just after the New Years festival, which corresponds to the (Lunar) New Year.
Scooter and I got our original mains through the story, and even managed to get involved with a successful Dragon's End meta event or two. 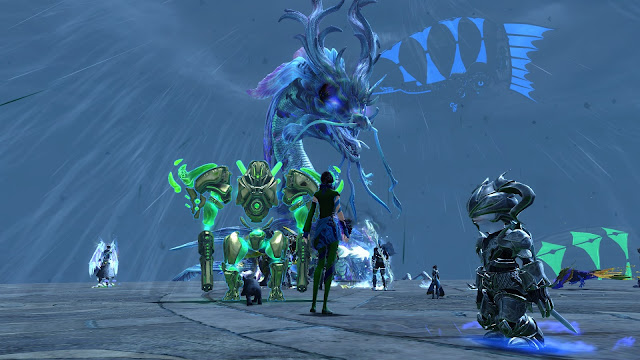 Most recently, we have been working through the restored Living World Season 1, where much of the cast of major NPCs were introduced. We missed it the first time around, so it's nice to experience it first hand instead of through the recap they posted for so long. I need more screenshots of the most recent episode, Clockwork Chaos, but it will probably be Saturday before we can run through it again.
~~~~~~~~

Scooter proofreads almost all my articles before I post them, for which I am very grateful. However, any mistakes are mine and mine alone (unless otherwise noted). If you are reading this post through RSS or Atom feed—especially more than a couple hours after publication—I encourage you to visit the actual page, as I often make refinements after publication. The mobile version also loses some of the original character of the piece due to simplified formatting.
From the mind of rowanblaze at 9:00 PM

Email ThisBlogThis!Share to TwitterShare to FacebookShare to Pinterest
This ramble relates to: Blaugust 2022, GW2