I tried to come up with a clever title, but failed. So, for the past five days, players of Guild Wars 2 were given the opportunity to test out three of the new elite specializations that will be released with the End of Dragons expansion in February. Scooter and I got in on the action. And though I don't think anything was broken–exactly–I definitely have preferences for one over the other two, and Scooter, even more strongly. The beta test is over for now, so all I have of these characters are the screenshots I took. 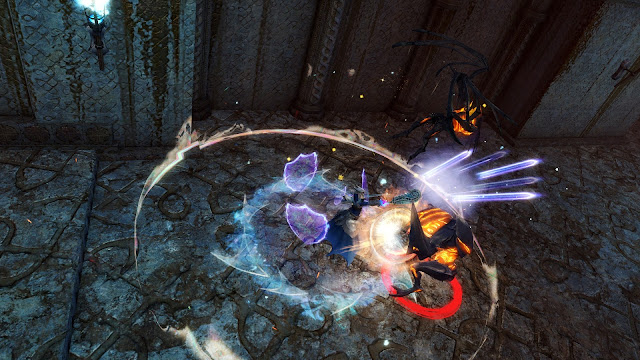 Of course, I spent way too long on devising character names for throwaway toons. But then again, any character worth making is worthy of a good name.

First, we have Dubheasa Nightglory (pronounced “duv-eesa” or "duv-essa"), a Sylvari Willbender. Dubheasa, in keeping with the Irish/Celtic naming convention for the Sylvari, is a very old Gaelic name meaning "dark beauty." Scooter named her Norn Willbender Cinna Gretadottir. Honestly, this is my least favorite of the three. The Willbender is a more nimble iteration of the Guardian, with access to off-hand Swords. In line with the Cantha/Asian theme of the expansion, presumably, the playstyle is meant to evoke wuxia productions like "Crouching Tiger, Hidden Dragon." The utility skills are all in the Physical category, involving leaps into and out of melee range. The Virtues Profession mechanic is also replaced with more physical movements, adding the Guardian's traditional blue flames for a burning effect. Lore-wise, the Willbenders were/are the personal guard to the Canthan Emperors, but I'm not exactly sure whose will is supposed to be getting bent. 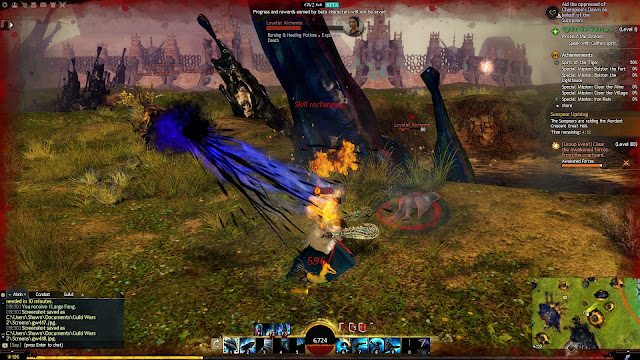 Scooter liked the playstyle, but felt it was really squishy. My biggest impression was squishy as well. The other two, despite being Scholars, were far more robust than the Soldier. I was constantly concerned for the health of poor Dubheasa, and she died more than once against foes the other two had no issues defeating. Another thing was that I didn't quite get a handle on the constant acrobatics. Other players may like the back and forth, and I like similar moves on the Revenant, but they are related to weapons, which I am using constantly, not utility skills I have to think about activating. Lastly, and I know this is a thing with all the elite specializations that afford access to an off-hand, the skills brought by gaining access to the off-hand better be spectacular, otherwise they end up pretty underwhelming. And I feel that's what happened here. The off-hand Sword skillset for the Guardian just isn't that special. 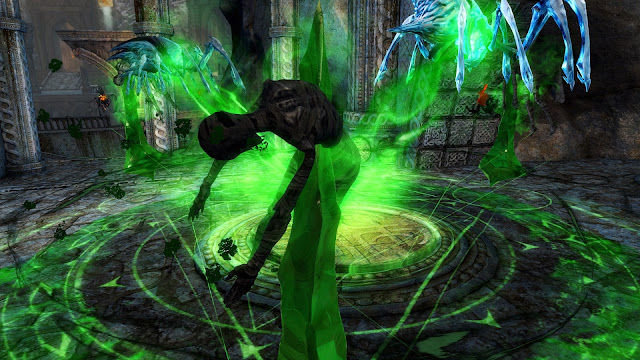 My next beta character is Yacketysaxxa, an Asura Harbinger, perhaps a bit chatty. As an aside, the Asura convention of short names often containing double letters–Boomi, Edda, Gixx–makes it difficult for me to come up with names that aren't taken. A harbinger is someone who goes before, presaging the arrival of another, more powerful individual or event. I'm not sure how that relates here, other than that in modern contexts, connoting some impending doom. Scooter's Human Harbinger was Annemarie Figoro.
The Harbinger is an elite specialization of the Necromancer, based on the idea that certain Canthan alchemists have been able to extract toxic magic from the Jade and weaponize it. The result is a sort of Old West apothecary gunslinger. Bringing extra DPS at the cost of diminished health through the Blight mechanic, the Harbinger includes a series of boon-giving Elixirs, and access to a main-hand Pistol. Like other necromancers, the Harbinger enters a Shroud, taking the name Harbinger Shroud from an advanced ability of the Scourge, introduced with Path of Fire. This is where the fun really begins. Much like the ability Life Transfer in the original Death Shroud, the Vital Draw ability pictured twice in this post sucks life force from nearby enemies to replenish the Shroud, while in this case also incapacitating them briefly. Additionally, Harbinger's lifeforce is constantly drained to replenish regular health points, making the Harbinger extremely difficult to kill outside high burst damage. 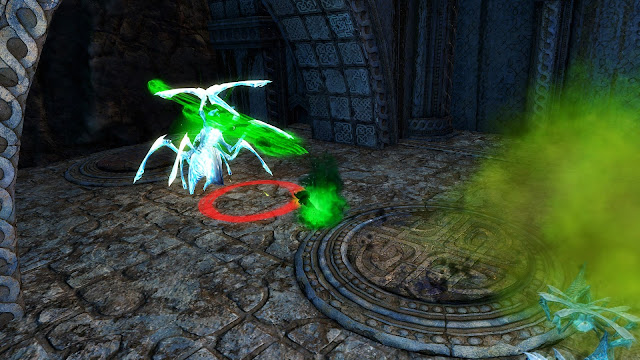 Something that doesn't affect me personally but gave me pause: apparently, the elixir icons are too similar for colorblind players to distinguish. At least one Redditor thinks they may just be placeholders. I'm not so sure, but the folks at Anet may take some of the input and do something more to distinguish them. However, I'm not sure I would be using them much anyway. I don't think the tradeoff in health is worth whatever boon is provided.

Another thing is that the Harbinger special effects are rather busy, to be honest. Granted that the shroud effect obscures the Necro in every iteration, the blight means that poor Yacketysaxxa was constantly be in a green haze whenever she was in combat. Thankfully, much of the elaborate effects you see on your screen are not visible to other players, who only see some minor swirls or cloud effects. 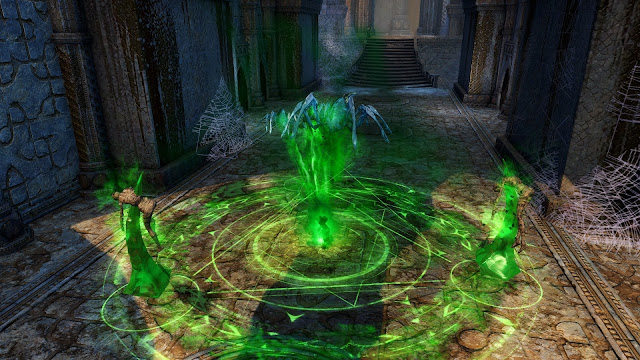 Scooter is not enthralled with pistols in general, only using them on her still fairly new Engineer. That, coupled with the self-damage mechanic, did not endear the Harbinger to her. And despite the Harbinger being fairly robust–YacketySaxxa was my only beta toon that never died–I'm not fond of the damage yourself to gain power" mechanic either. Though I would still probably work toward Harbinger on my regular Necro, Hasl Catkin, I am unlikely to use the elixirs, preferring the menagerie of minions. And equipping the pistol would require sacrificing Hasl's beloved axe. 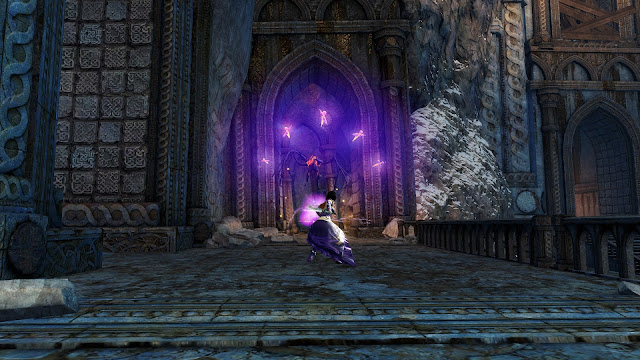 At last, we come to both Scooter's favorite and mine, the Mesmer elite spec, Virtuoso. I named my toon Verthandi Valkyr. The name itself means "Happening" or "Present." Verthandi was one of the Norns in Norse mythology, corresponding somewhat to the Greek trio of Fates, and more specifically to Lachesis, the Measurer. The Norns also featured in Shakespeare's Scottish Play as the Wyrd Sisters, who were witches much like my Mesmerizing Virtuoso. Valkyr, of course, is a reference to the Valkyrie, divine battle maidens who carried the honored dead from the battlefield to Valhalla. Once again, I am slightly baffled by the name of the specialization, since I associate the term virtuoso with music. Scooter pointed out that virtuoso may simply indicate a high level of skill in any endeavor, I still think that is only by reference to virtuosity with a musical instrument. However, the devs are using that metaphorical sense in their description of the spec, so Scooter is right. The only acknowledgement of the Virtuoso's relationship to music is in the profession mechanic Bladesong. Scooter also rolled a Norn Virtuoso, Rosalee Fiersdottir.

Normally a crafty Mesmer that depends on illusions and deception, the Virtuoso eschews such trickery for straight-up mind shattering offense. The Virtuoso gains access to a main-hand Dagger and a series of Psionic utilities. While a two-handed weapon like a Bow or Hammer offers more opportunity for exciting elite spec abilities, the Dagger here delivers some interesting variation. Much like the Mesmer's Greatsword abilities, which are best used at range, the Virtuoso Dagger is not for melee attacks, but rather a sort of focus for delivering Psionic lacerations from across the battlespace. If the Virtuoso does decide to get up close and personal with an opponent, the Virtuoso Sword replaces Illusionary Leap, which would normally produce a clone, with the more direct Blade Leap, adding the ability to cripple foes upon retreat. 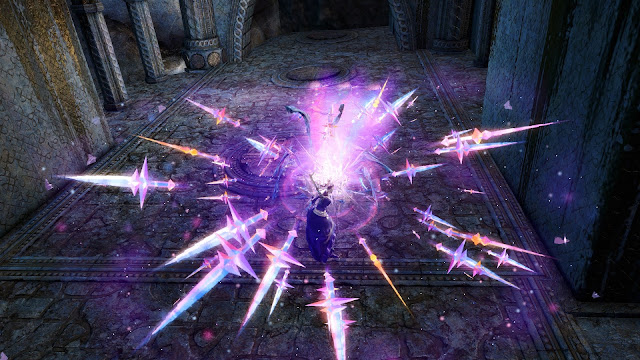 Unlike the other two elite specs reviewed here, the Virtuoso seems better than the basic  Mesmer in almost every way.  The Dagger and utility skills are both flashy and DPS heavy, though as said before, this is mostly for the player's own benefit, other players only see vague swirls and the occasional raining daggers. I'll caveat that by saying it may be my own graphics settings minimizing the special effect produced by other players.

Another thing that draws me to the Virtuoso over other Mesmer specs is that the daggers don't evaporate with the death of their target or the end of the battle. They seem to form with some regularity regardless of the abilities you are using, and persist so you can use the Bladesong abilities (replacing Shatters) to open a fight, rather than waiting for them to build up.

Now, I want to say that I didn't get more than an hour or so, tops, actually playing the Willbender or Harbinger, and only a little more than that with the Virtuoso. I also didn't do more than run around a couple areas (mostly the Derelict Delve), and did not change the default Traits for each spec. Given more time, I might have experimented a little more, which is one reason why I did not submit any tickets to the devs. I didn't encounter any specific bugs, and the various specializations may be working exactly as intended. And let me be clear: none of the specs were horrible. The Willbender is perfectly playable, if not as robust as I would normally expect from a Guardian. But I definitely am excited to play the Virtuoso again. And I can't wait for the next taste of End of Dragons.
~~~~~~~~

Scooter proofreads almost all my articles before I post them, for which I am very grateful. However, any mistakes are mine and mine alone (unless otherwise noted). If you are reading this post through RSS or Atom feed—especially more than a couple hours after publication—I encourage you to visit the actual page, as I often make refinements after publication. The mobile version also loses some of the original character of the piece due to simplified formatting.
From the mind of rowanblaze at 6:10 PM

Email ThisBlogThis!Share to TwitterShare to FacebookShare to Pinterest
This ramble relates to: ArenaNet, beta, Blaugust 2021, GW2