World of Warcraft took a back seat to nominally more passive video viewing this week. I say "nominally" because the show Scooter and I spent the most time on was actually a pretty engaging mystery. 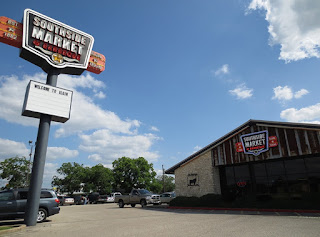 But first: We haven't spent our entire week sitting in front of the boob toob. On Saturday, we got out and went on a little road adventure that involved quite a few country roads and a tour through some model homes we'll never be able to afford, nor that we truly need. (I'd like a bigger place, but it's really only the two of us and the puppernauts. We don't need a house three times the size of our current one at four times the price.) After a very roundabout journey, we ended up at the oldest barbecue joint in Texas. Hands down, Southside Market and BBQ in Elgin has the best smoked brisket and turkey I have had in almost two decades eating Texas barbecue. Normally, I find smoked brisket to be a bit too dry, preferring the cut as the perhaps more familiar slow-cooked corned beef. Smoked turkey breast also tends toward the dry side, but usually has a good flavor. 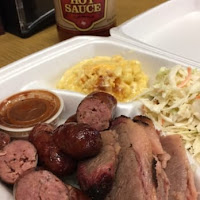 The folks at Southside have managed to keep their meats moist and tender and flavorful, perfection. I also had the pork, which is very well done, but not a stand-out. And their sausage is delicious; though again, not my favorite thing to eat. The sides are typical BBQ fare, I had potato salad and mac & cheese (with real cheese, not Kraft powder), while Scooter sampled the pinto beans as well as the potato salad. They did have salads available (for an upcharge), but the lack of fresh veggies or fruit has always disappointed me when going to places like this. In any event, I highly recommend that you try this place out if you're driving between Austin and Houston. Or just out for a little weekend adventure in Central Texas.

A rare phenomenon, Scooter and I stayed up late Saturday evening to attend a 10 pm showing of Beauty and the Beast. You don't generally come here for movie reviews, Dear Reader (or restaurant reviews either, come to think of it), so suffice it to say we really enjoyed this new live-action version of "a tale as old as time." If you enjoyed the animated classic when you were younger, I think you'll like this version. My only complaint was that Luke Evans, while performing admirably in the role of Gaston, just didn't have the stature/bulk of the animated character. I feel that there are actors in Hollywood that could have pulled it off both the look and the performance. 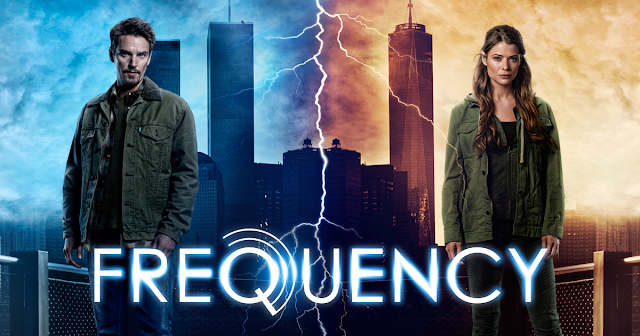 Lastly, for the past several evenings, Scooter and I have been watching Frequency on Netflix. The show was running on the CW here in the U.S. this past fall, playing out roughly in real time during the course of the short season. Apparently, it has not done well in the ratings, so they pushed it to Netflix along with another CW program in hopes that it might generate more interest. As far as I can tell from the news, that effort has not been successful. However, I think the show is a worthy successor to the 2000 film of the same name that starred Dennis Quaid and Jim Caviezel. In the show, Peyton List and Riley Smith star as a New York City police detective and her father (also a cop), separated by 20 years and communicating with each other through a quantum entangled (magic) ham radio. If you've seen the movie, the concept is generally the same, though it plays out differently over the course of the 13-episode series. I recommend it be watched on a binge over a few nights as I did. Unfortunately, I fear the premise of the show—with its time jumps and "butterfly effect" timeline—did not play well in weekly installments. Still worth a watch though, which is saying a lot since I hardly watch any television anymore.
~~~~~~~~

Scooter proofreads almost all my articles before I post them, for which I am very grateful. However, any mistakes are mine and mine alone (unless otherwise noted). If you are reading this post through RSS or Atom feed—especially more than a couple hours after publication—I encourage you to visit the actual page, as I often make refinements after the fact. The mobile version also loses some of the original character of the piece due to simplified formatting.
From the mind of rowanblaze at 1:03 PM 4 comments: