Greetings, Traveler!
So I went to see a movie on Sunday with Scooter. I had seen the trailer for Free Guy and figured we'd have to see it when it comes out on whatever streaming service. But Scooter saw it and said we had to see it in the theater. So we made a date and got tickets at our favorite movie palace. This is one of those places that serves actual food and not just popcorn and hotdogs, so we got there early enough to have our food before the movie would start. I'm not going to go deep into the plot, but I wouldn't count out any spoilers, so bottom line up front: I liked the movie, and would recommend it to anyone likely to be reading this mostly gaming blog. If you don't like spoilers, stop reading now. 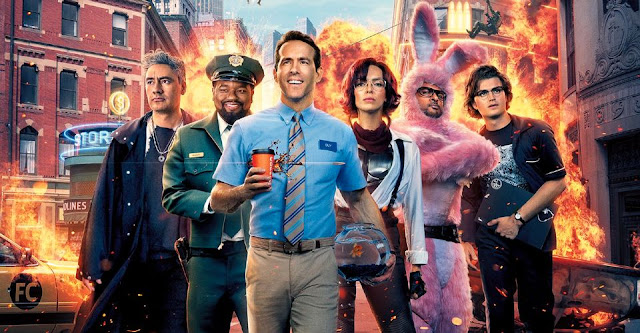 This is an interesting turn for Ryan Reynolds. I used to say he was best when his deadpan snark was given free rein, like "Two Guys, a Girl, and a Pizza Place," "Van Wilder," and of course, "Deadpool." I always felt that his attempts at more sincere characters like in "Definitely, Maybe" or "The Proposal" fell a little flat. I mean they're good performances, but he does better with the snark. Here, though, his do-gooder character is charming in a way that he seemed to struggle in other romantic comedies. Because make no mistake, under this homage to online game worlds like GTA, Fallout, and Cyberpunk 2077, there is a great little RomCom.
Taika Waitiki chews the scenery quite well as the villainous videogame developer, and I could almost see the nods to various game executives more concerned with profit than quality, though I think his attempted solution was a little unrealistic. I've never seen Jodie Comer in anything else, but she's in a ton of stuff. I'm getting well past the age where people suddenly turn up in major roles, and I look them up to find out they've starred in some hit show I've never bothered to watch. Anyway, Comer did an excellent job as the woman on a mission, equally badass in the game and in the real world. Lil Rel Howery, who in "Get Out" made us actually care about a TSA agent (sort of), is again underutilized, but does great with what material he's been given.
I don't really do negative reviews on here, mostly because no one is paying me to, and I'd rather review movies I would recommend. "Free Guy" isn't perfect, and even stretched my suspension of disbelief a bit. But overall, it's a fun romp. And while there are obviously plenty of people who like to get into video games simply to wreak havoc, there are also those who want to be Big Damn Heroes and save the world if they can. Luckily, there are plenty of games that do that, even if they don't always grab headlines.
"Don't have a good day, have a great day!"
~~~~~~~~

Scooter proofreads almost all my articles before I post them, for which I am very grateful. However, any mistakes are mine and mine alone (unless otherwise noted). If you are reading this post through RSS or Atom feed—especially more than a couple hours after publication—I encourage you to visit the actual page, as I often make refinements after publication. The mobile version also loses some of the original character of the piece due to simplified formatting.
From the mind of rowanblaze at 10:03 PM

Email ThisBlogThis!Share to TwitterShare to FacebookShare to Pinterest
This ramble relates to: Blaugust 2021, Movie Review