Greetings Traveler!
*Dusting off a chair for you* Welcome back to my little corner of the Internet. Things have been crazy around here. Well, not around the blog. Scooter started a new career. I've taken on new and different responsibilities at work, initially as a supervisor and technical writer, then more recently as a subject matter expert for a small flyaway training team. (Previously, I had been a classroom trainer for the same family of systems.) In mid-July, I "celebrated" my 14th anniversary with the organization; quite a feat, considering I told myself when I started that I would stick with this job at least 5 years if I could.
So it's Blaugust again, which I apparently haven't participated in for 5 years. I had seen Belghast posting a few days ago about it, but today's post kind of kicked me into gear. This month will be busy for me, but I'm not traveling, so I should be able to take a few minutes to kick out some posts. It may not be pretty. In the past, I have spent way longer than I should on any given post. Even now, I have been at this for a while today, because I was distracted by other things on Twitter and Blogger. 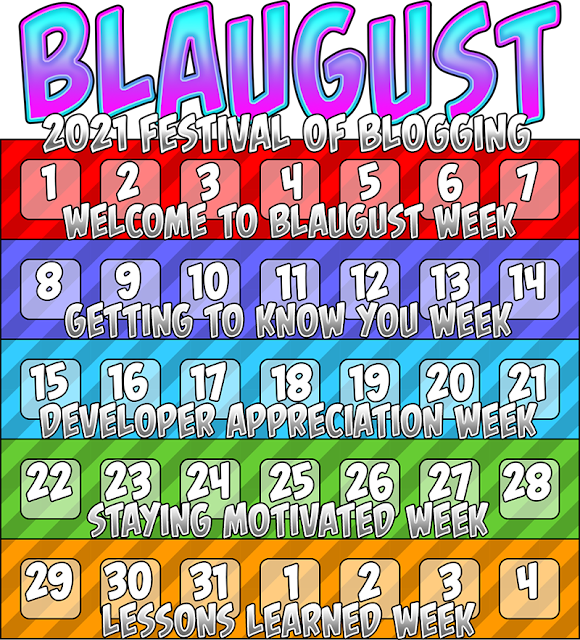 Anyway, what have I been up to lately in the realm of gaming? Scooter and I pretty much exclusively play Guild Wars 2 nowadays. Right now, there is a World Boss Rush event going on. We usually only do that stuff if we're in the area, but it's fun to bounce from place to place around Tyria and Zerg rush the bosses. I just realized it would be a good way to pick some of the achievements we'd been eyeing. 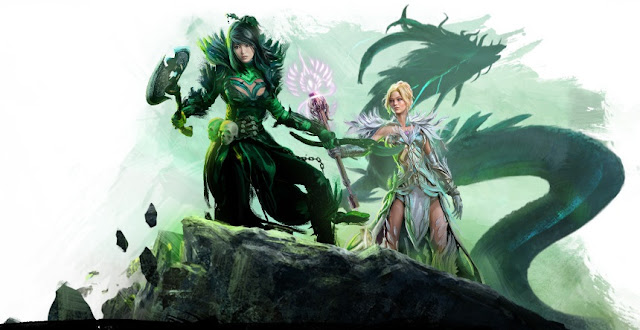 The other interesting news coming out of ArenaNet this week was a livestream with more information on the next expansion "End of Dragons." They announced a planned drop in about six months: February 2022, along with preorder options. Since we know we'll be playing, and I like to support the game, Scooter and I purchased our copies. Some of the perks were available immediately, a mount skin, cape, and more. Some, like a skin for the new skiff mount, will not be available until launch.
~~~~~~~~

Scooter proofreads almost all my articles before I post them, for which I am very grateful. However, any mistakes are mine and mine alone (unless otherwise noted). If you are reading this post through RSS or Atom feed—especially more than a couple hours after publication—I encourage you to visit the actual page, as I often make refinements after publication. The mobile version also loses some of the original character of the piece due to simplified formatting.
From the mind of rowanblaze at 4:50 PM

Email ThisBlogThis!Share to TwitterShare to FacebookShare to Pinterest
This ramble relates to: Blaugust 2021, GW2