We've had a lot of rain for the past week or so. Which is great, because we missed out on a ton of rain over the summer. Also, the summer started with 100°F temps in May and it didn't really let up until August. That August was as cool as it was (still in the 90s) was a relief after May-July.

Of course, I've been playing GW2 and not much else. And not even much of that with school starting back up. Not that I am in school. But Scooter (a teacher) and I share an office, and my gaming keypad disturbs her concentration.

However, today I spent some time finishing out Herald (powered by the legendary dragon, Glint) on my Revenant, Angelonia Embersage. Most of my other level 80s have at least the two elite specializations from Heart of Thorns and Path of Fire, and I am running them through hero points in Cantha to get them the End of Dragons elite specs. Angelonia was missing most of Herald (from HoT) so I took her through that spec first.

I had forgotten that the HoT specs basically can't be played until complete because of the way the traits and skills were organized for those specs. This is especially true for the Revenant, since the entire utility bar changes, and you can't mix and match the utility skills from older specializations. In Path of Fire, they changed it so that you can have a full trait line for the new elite spec as soon as you have 90 hero points devoted to the spec and use skills from other specs to fill out the bar (again, except for Revenant). 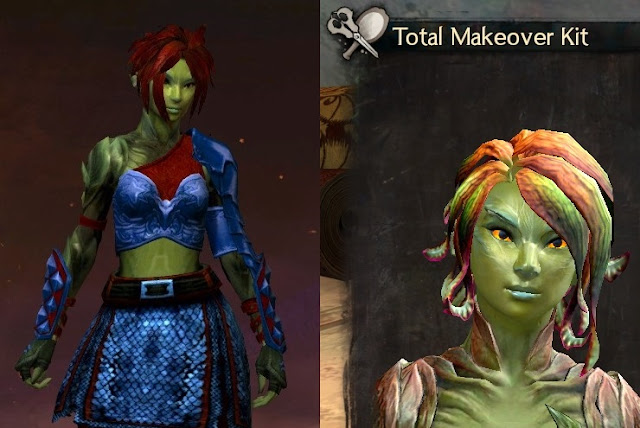 In addition to completing Herald on Angelonia, I decided to use the total makeover kit I had in my inventory to, well, give her a makeover. You can see the changes in these pics. All that time outside has "tanned" her skin from a sage to a dark olive. She grew out her cinnamon leaves and dyed(?) them nifty desert dusk. I made a few other tweaks to her features, but she is mostly the same. Maybe a little more hardened from when she first popped out of the Dream. I changed her night-glow as well; it's now less like embers, and more like twilight. However, that dusky glow works well to really change her new do at night, as well. Meanwhile, her ember eyes remind you that morning will arrive soon enough.
~~~~~~~~

Scooter proofreads almost all my articles before I post them, for which I am very grateful. However, any mistakes are mine and mine alone (unless otherwise noted). If you are reading this post through RSS or Atom feed—especially more than a couple hours after publication—I encourage you to visit the actual page, as I often make refinements after publication. The mobile version also loses some of the original character of the piece due to simplified formatting.
From the mind of rowanblaze at 7:32 PM