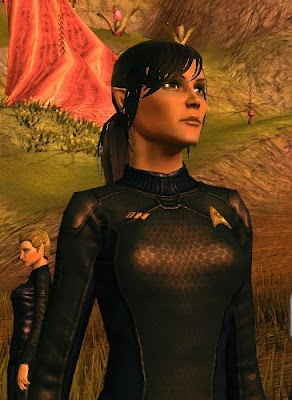 Rowan is half Vulcan and half Human, born in 2370 aboard the U.S.S. Farragut, where her parents were serving. Her father is a full-blooded Cree from Saskatchewan, old Canada. Her mother was a Vulcan from Shi'Kahr province. Both parents were members of Starfleet, but Rowan's mother was killed in action during the Dominion War. Her father resigned from Starfleet in grief over the death of his wife, returning with Rowan to his home on Earth. Having been raised among humans, Rowan is more relaxed about her emotions than most Vulcans, but still more generally reserved than humans. Some Vulcans might consider her V'tosh ka'tur, though she does not formally subscribe to that philosophy. Her keen and logical intellect contrasts with her spiritual outlook, a result of her First Nations heritage. Rowan studied at Starfleet Medical Academy, completing her residency in 2401. She specializes in Xenoendrocrinology, and Combat Trauma. Not a starship commander by choice, Rowan nevertheless has accepted the mantle of command, as she feels it is a logical extension of her Hippocratic Oath to care for her crew. 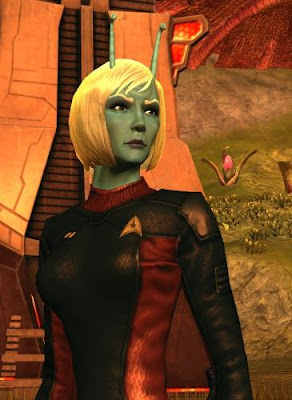 Tarah is Rowan's First Officer, Chief Tactician, and closest friend, having been with her since before the Battle of Vega. Born on Andoria in 2376, she is one of the last Andorian children born before the resolution of the Andorian fertility crisis and therefore seen as precious to her people. Her zhavey was particularly upset with her decision to join Starfleet, considering Tarah's responsibilities to her bondgroup to be more important than her "personal ambitions." Tarah graduated from Starfleet Academy in 2400, with a major in Tactical Analysis and a minor in Military History. Like all Andorians, Tarah is bonded to three other Andorians, but only one of her bondmates, Shrel, is aboard. Though efficient in her duties, prior to the arrival of her ch'te, Tarah would occasionally become despondent over the long separation from her family. The crew of the Wayfarer have in many ways become her surrogate family, especially Rowan and Thierry. 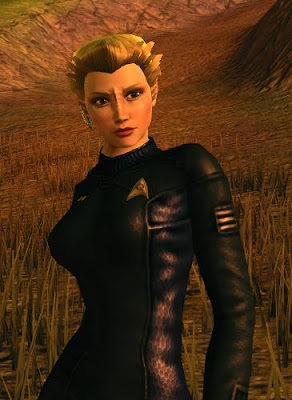 Larrea hails from the rural Kendra Province of Bajor. Born in 2379, she attended Starfleet Academy around the turn of the century, graduating in 2402 with degrees in Advanced Theoretical Physics and Probability Mechanics. She joined the crew as a lieutenant when they transferred to the Wayfarer.  Having led a sheltered childhood with her very traditional family on Bajor, Larrea went a little wild at the Academy and continues to be a bit of a man-eater. She is also a bit of a loose cannon on away teams, frequently gets in over her head, and needs to be rescued by the rest of the team. 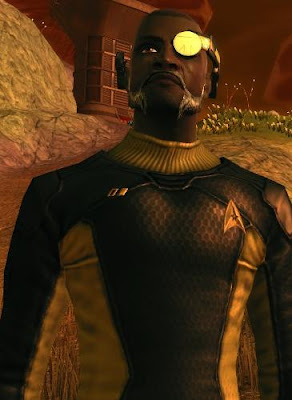 Thierry is from the bayous of Louisiana, born in 2367. He holds advanced degrees in Warp Mechanics and Electro-plasma Systems Engineering. A wonderful amateur chef, he often treats his crewmates to delicious Cajun meals. He is also a bit of a father figure to many of the bridge officers, being the oldest member of Rowan's crew, though less than three years older than Rowan herself. He could be a starship commander if he so chose, but Thierry is more comfortable in the position of chief engineer, maintaining and improving the efficiency of the warp engines and ship systems. He is one of Rowan's most trusted advisers, spinning sage advice in his characteristic Cajun drawl. 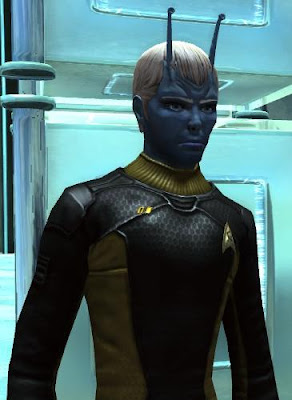 Tarah's ch'te, Shrel, is one of the new generation of Andorians born using fertility techniques from the Gamma Quadrant. As such, he is a rare Andorian with a fraternal twin, Vilithar sh'Rothress. Shrel and Thar are close, corresponding often. Born in 2378, he was bonded with Dilat th'Evram, Zharran sh'Endilev, and Shintarah zh'Rithsiria in 2398, the year he entered Starfleet Academy. Dil and Zhar reside on Andoria, not having enlisted in Starfleet. Shrel graduated from Starfleet Academy in 2402 with degrees in Structural Engineering and Systems Integration. His first assignment was at Starfleet's Harbortown Shipyard orbiting Andor. After consultation with Dil and Zhar, he accepted Rowan's invitation to join Tarah and the crew of Wayfarer. Tarah was delighted at his arrival, and was glad that they had the approbation of their other two bondmates. Shrel is a skilled engineer, and possesses an even-tempered humor that is a complement and contrast to Tarah's occasionally intense personality. His easygoing charm endeared him to the crew immediately. 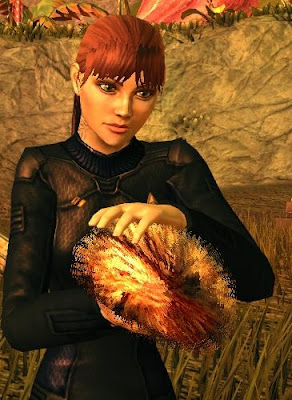 Auzzie, an unjoined Trill born in 2392, is the youngest member of Rowan’s crew. A prodigy, she is on the waiting list to join the Symbiont candidate program, but has been deemed too young to be a host for now. Auzzie applied to and was accepted to Starfleet Academy in 2406, graduating just this year, 2409, with degrees in Exobiology and Anthropology. She is an invaluable member of Rowan's crew, though she needs a few more years of experience before she will be ready to take command. 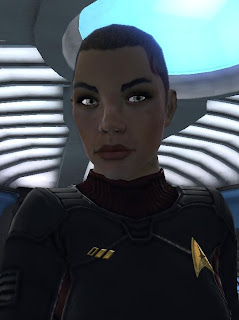 Fatima Gasira was born in in the city of Prairieview, on Cestus III, in 2379. Gasira means “brave” in Swahili. She enrolled in Starfleet’s MACO Academy at West Point, New York, Earth in 2397. Starfleet Command had learned a lot about the value of troops specializing in close-quarters and hand-to-hand combat tactics during the Cardassian War in the 2350s; and during the Dominion War that followed in the 2370s, they decided to revive an ancient tradition of Marine warriors that had faded from Starfleet in the first years of the Federation, rebuilding a dedicated Corps to accompany Starships on exploratory and combat missions. Gasira graduated from the MACO Academy in 2401 with degrees in Tactical Analysis and Kinesiology (emphasis in Martial Arts). She served in the Klingon front on various planets before being placed in command of the 50-member MACO platoon aboard La Gitana. Normally a lower ranking officer commands a platoon, but Gasira is a major, able to hold her own in senior staff meetings aboard ship. She is outranked only by members of La Gitana’s command team, Rowan, Tarah, Larrea, and Thierry. She has a large tribal-style tattoo on the left side of her head, barely visible under her close cropped hair, part of which extends down past her hairline as a sideburn. Gasira is thoroughly a Marine, direct, gruff; a hard charger. Her combat-expedient approach to problems rankles Rowan, who is leery of the aggressiveness of the MACOs and the need for combat troops on her ship.
_________________________________________ 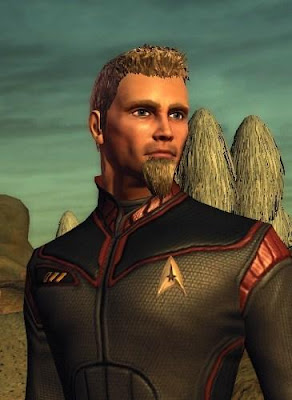 Donovan Locke is a California native. Born in 2384 and raised practically on the beach, Locke is an avid swimmer and surfer, with the stamina and build to match. While a gifted tactician, he is a sometimes brash risk-taker, much in the vein of Jim Kirk. Donovan is loyal to his crew, and possibly a bit overprotective, drawing fire away from them when he needs to, risking himself in the process. An ace pilot, he often takes over the helm of his ship personally. He met both his wife, Ginny, and his chief engineer, Blish, at Starfleet Academy, where Blish often helped Locke through the required engineering courses. 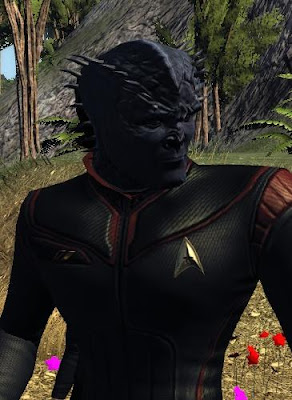 Witko is descended in part from Jem'Hadar stranded in the Alpha Quadrant at the end of the Dominion War. No longer dependent on "White," the second generation members of Witko's colony applied to join the Federation in 2383. Born in 2391, Witko joined Starfleet Academy in 2401 as an adult of his species, where he proved adept at both ground and space tactics. He joined the crew when Locke took command of the U.S.S. Red Cloud. A crack shot, Witko is Locke’s weapons expert, though quite capable of hand-to-hand combat. Witko’s full name resembles that of the Lakota warrior “Crazy Horse.” 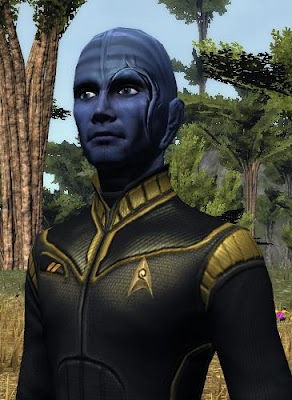 Chief Engineer Blish hails from Deep Space 9, where he was raised after being born on Bolarus IX in 2385. His parents were shopkeepers on the promenade, but Blish insisted on joining Starfleet, much to the dismay of his mother, who had lost family during the Dominion War. A genius at warp theory, he obtained a Doctorate in Engineering from Starfleet Academy, before receiving his commission. He acquired the nickname "James" and its diminutive "Jimmy" from his friend and classmate, Donovan Locke, who found it inexplicably funny. Blish was injured in the Borg attack on the U.S.S Khitomer, his first assignment, where Locke found him and rushed him back to the Powhatan. 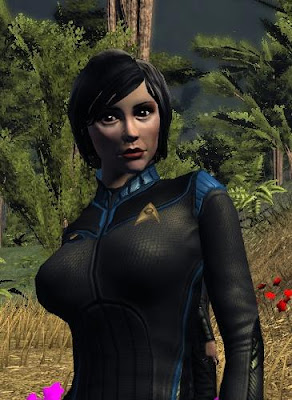 Doctor Ginevra Locke (nee Prinos) is the ship's surgeon. She was born in the Loneel Valley on Betazed in 2382. Ginny's maiden name resembles the Latin genus of the alder tree. She was accepted to both the University of Betazed and Starfleet Medical Academy, but chose the Academy as a chance to get off-planet. She met Donovan while attending the Academy, and he was a Starfleet cadet. Like most full-blooded Betazoids, Ginny is a telepath and tends to be brutally honest, a trait which endeared her to Locke, but can be exasperating to her other crewmates. Of course, having a Betazoid at your side is always good during negotiations. 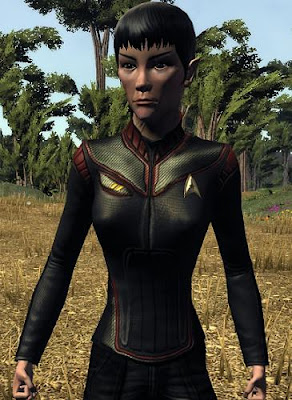 Sera was born and raised in the city of Vulcana Regar. Taciturn like most of her race, she is an expert in multiple martial arts disciplines, including suus mahna, mok’bara, and capoeira. She prefers dual pistols as opposed to long-barreled weapons, as they allow for quick strikes in close quarters combat. Sera is fiercely loyal and protective of her captain, using her fighting skills act as his bodyguard in hostile ground situations.

Sera’s family name means "Place of the (Snow) Avalanche." It is unknown as to where this name originated.