If you can gain all the possible abilities in TSW on a single character, why would you ever need more than one? For roleplaying, silly! (By the way, the Faction Missions each tell a different side of the story.) The Links on the "Nicknames" lead to the TSW Chronicle, with information on my characters' current stats. 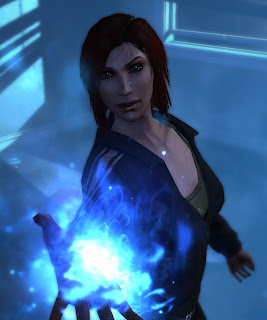 As a military brat growing up near Waco, TX, Samantha Hawthorn loved comic books, especially the X-Men; though when playing with her friends, she insisted on being Wolverine as opposed to Jean Grey or Storm. Her parents made sure she had a healthy respect for firearms, regularly dragging the whole family on hunting trips and to the firing range, where Sam received training in various rifles, shotguns, and handguns.

Sam's interest in history was kindled when her family was stationed in Germany for several of her teenage years. The story of the rise and fall of the Templar Order fascinated her. This interest led to a career in academia, where she did her Ph.D. dissertation on the subject. By her late twenties, Dr. Hawthorn had become an assistant professor of History at Texas A&M University, specializing in Medieval European History. She was on track to receive tenure just as she was visited by the Bees, then the Illuminati.

Now that she is aware of their modern incarnation, Sam is more than a little disappointed that she was not contacted by the Templars before the Illuminati reached her; something Kirsten Geary has noted with a more than a bit of Schadenfreude. KG ironically refers to Sam as her Lone Star Belle, given her proficiency with firearms and fist/claw weapons—and her business-like demeanor.

The unfortunate living and the fortunate unliving only briefly find themselves staring down the business end of Sam's trusty weapons. With an intense gaze and an inquisitive mind, Dr. Hawthorn tackles the mysteries of the Secret World with gusto, but looks to subvert her new employer's aims whenever possible.

With a graduate level education and a no-nonsense take-no-shit attitude, LoneStarBelle combines two of my own aspirational qualities. She finds much of the back-room dealing and glitzy parties of Illuminati politics distasteful in the face of the apparent apocalypse. Her proficiency and inclination to use (anima-infused) firearms belie her razor sharp intellect, which often gets her in trouble with her Illuminati handler Kirsten Geary. But KG can't deny the results she gets when Sam is in the field, and the Illuminati are all about results.

Sam the LoneStarBelle is my fashionista. She has always worn more varied outfits than Dortmunder or Poppyshock. Especially since I discovered the Valet addon, thanks to guildmates, now Sam has several outfits that I change on a whim. Also—partly because of this fashion trend—I have decided to complete all of the inner circle abilities before trying to finish a preset deck on Sam. This will get me not only the coats awarded for each weapon, but also all the "Starter Deck" outfits. In my NaNoWriMo effort from November 2012, the character based on Sam had a poster of Hugh Jackman as Wolverine in her office—and was on the cusp of a promotion at the University. Samantha is the toon I tend to play if Sctrz is busy not playing TSW 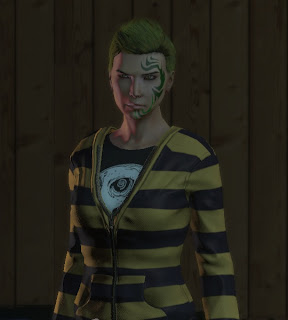 Hinageshi Miyamoto was born in Hachinohe, Aomori, Japan, but moved to Tokyo in her teens to study electrical engineering the University of Tokyo. Despite rigorous coursework and excellent grades, Hinageshi became involved in the Tokyo punk scene, cropping her hair and dying it a yellow-green and painting designs on her face on evenings out.

On the night of the explosion at Orochi Tower, Hinageshi was visited by the Bees, followed a short time later by the monks of the Dragon. Having received training in Kendo in her youth, along with her collegiate studies in electricity, Hinageshi took the Blade and Elemental Focus as her primary weapons. A sharp sword makes short work of undead and living flesh alike, but she takes every opportunity to bring Thor's Hammer down on her foes.

Despite her rebellious appearance, "Poppyshock" as she has come to be known, has a no-nonsense attitude, and a devotion to a personal code of justice that borders on the fanatical.

The original Poppyshock was a female Draenai Shaman character I played in World of Warcraft. I came up with the name while going through the baking/spice aisle of the supermarket. Hinageshi means "poppy" in Japanese and is not unheard of as a girl's name. Miyamoto is a Japanese surname meaning "(one who lives) at the shrine." 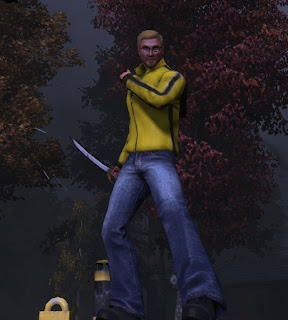 Recruited by the Templars from Dortmund, Germany, Karl Eichenherz is a former forensic pathologist in his mid-thirties. Trying to connect with his spiritual roots in his youth, Karl studied Germanic Paganism and the Judeo-Christian Bible.

Shortly after swallowing a Bee, Karl was invited to Templar headquarters in London. Upon arriving, Karl delved into the library's arcane collection, finding such ancient theologies and ceremonies as Blót and Hebrew temple sacrifices to have their origins in the rituals of Blood Magick. He also found an affinity with blade techniques, training in the Crucible under the Templar Master-at-Arms, Brigadier Lethe.

While at Temple Hall in London, Karl befriended French archaeologist Dexrina "Dex-y" Sunfleur, who became his mission partner and lover. The first time Dexrina kissed Karl, her lips left a permanent red buss on his cheek.

Karl is a taciturn observer of human behavior, and sees his work with the Templars as an extension of the investigative work he did in his prior career.

Being the character I use most often when playing together with my gaming partner and bride, Sctrz, in TSW, Karl is my Doppelgänger: the character that looks like me or an idealized me. Eichenherz is a pseudo-German surname that literally translates as Oak(en)heart, after my first character in WoW, a male Dwarf Hunter. "Dortmunder" has several connotations. The I.A.V. Dortmunder was an Alliance capital ship in the pilot episode of the long-lamented Firefly. Dortmund is a city in Germany and the terminus of an Autobahn that I frequently traveled during my most recent visit. Lastly, a fellow blogger, Kadomi, who is from the city, insisted that no character named Dortmunder could possibly not wear the colors of the city's eponymous football (soccer) team, yellow and black. Honestly though, the more I think about it, the more I wish I'd used "Dortmunder" for his surname and "Eichenherz" for his nickname.