NO SPOILERS, GC (well, a very minor one)
So last night, I took my GF, and mine and her daughters, to the midnight showing of HP7a. Did my huge Potterphile daughters love it? 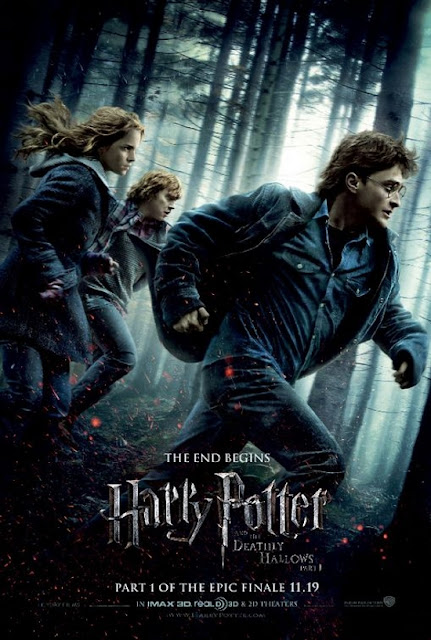 Yes, they did. I liked it a lot, too. It suffers in many ways from the same thing that "The Empire Strikes Back" did. It is essentially a set-up for the last film, ending on a dark note. In the story, the characters are just about at their lowest. It's the middle of the book, and things look bleak. The filmmakers did a great job of capturing the plot of the book though, without the excessive abridgement of the stories that the last three films suffered. They had to make a few corrections to get there; a minor one being Harry's meeting the oldest Weasley son, Bill. In the books, they'd met a few years previously.
Be warned, the MPAA has rated the film PG-13 for some sequences of intense action violence, frightening images and brief sensuality. This is not necessarily a movie for young children. A five-year-old sitting behind us was upset by several disturbing and/or frightening scenes.
The special effects were seamless and very realistic, as is to be expected by now. No real gee-whiz moments, but neither did they detract from the experience. The tone and feel of the movie is perfect for the first part of the book. Like I said, I liked it and am really looking forward to the last film. I never listen to critics anymore. They have no clue what I enjoy in a movie. But I don't need to tell you that, Dear Reader. If you're not a Potterphile like me and my family, this might could wait for DVD or Blu-Ray. If you are, "Harry Potter and the Deathly Hallows" is a must see.
From the mind of rowanblaze at 8:49 AM

Email ThisBlogThis!Share to TwitterShare to FacebookShare to Pinterest
This ramble relates to: Movie Review, Off Topic