. . . in which I discuss this weekend's exploits with the illustrious Scooter and discuss my primary SWTOR Characters. (and also learn about html hex color values)

Saturday and Sunday were a productive weekend for me—in Star Wars: The Old Republic and not much else. Scooter spent a chunk of the day on Saturday out and about with her daughter, leaving me to make some progress on my Sith Juggernaut, Buloke (who will discussed in a later post), and Valerija, my "baby" Sith Sorceror. I ran my first PUG using the queue (Black Talon) and got 20 commendations for it. They must be desperate for people to go, because I think that's a daily reward for running at least one. I also started a new Sith Warrior; more on that later.

Chatting with Scooter on Saturday evening, we decided to role two Sith to run together. We also went Dark Side. Since I already have two Inquisitors, I decided to role another Warrior, with the intent make her a dual wielding Carnage Marauder. Scooter, preferring a good stand-off from the actual melee, roled a Sorceror. We so thoroughly enjoyed ourselves on Saturday night that we were up until 2 in the morning; then, after a couple errands on Sunday, were playing again by about 11 o'clock. By the time we were too tired to go on last night, we finished about a third of the way through Dromund Kaas and are about level 17 or 18.

On Twitter the other day, Zernebog and I were discussing character names, and he seemed impressed by my choices. We agreed to do (redo) write-ups on our characters. This ended up being a bigger project than I realized at first, and I am only about half finished. But I figured it might be better to break it up a bit anyway. Most of my characters are on... 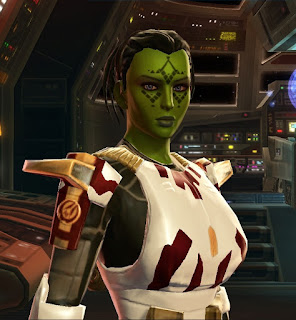 Mirialan, Republic Commando
"There's some good in this world... and it's worth fighting for."

Her name recalls the martial prowess of the Greek hero Achilles, and is the genus name for yarrow, a medicinal herb used by him to treat his wounded men in Homer's Iliad.

Lieutenant Achillea Sunsage is a Republic Army medic who has risen quickly through the ranks as a result of the defection of her special forces squad, codenamed "Havoc," and her subsequent pursuit of her former comrades. Like many of her people, Achillea has a strong sense of right and wrong, and will not compromise her principals for any reason, which occasionally gets her in hot water with her commander, General Garza. But she is loyal to her new squad, developing especially close relationships with the Imperial defector, Elara Dorne, and her second-in-commend, Aric Jorgan. Her facial tattoos symbolize her skill in marksmanship and the healing arts.

Admittedly, I don't have much of a backstory for Achillea. But she is a direct spiritual successor to my TSW Illuminati character, Samantha "Lonestarbelle" Hawthorn, a smart, tough-as-nails maverick, doing the right thing despite the disapproval of her superiors. I had an Achillea during my original tenure in SWTOR, but decided to start her over when Scooter decided she wanted a new smuggler. We have just left Nar Shaddaa at about level 32. 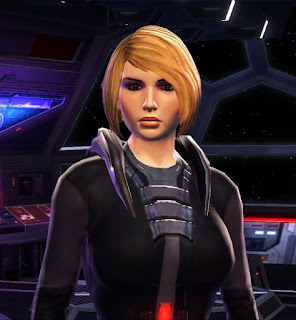 Human, Sith Sorceror
"The Force is strong with this one."

Her name is a Slavic variant of Valeria; the Latin root means "to be strong" or "to be healthy." Valerian is an herb with many medicinal uses.

Valerija is a former slave from the Outer Rim, both strong in the Force and bearing a striking resemblance to her Sith mentor, Darth Zash. Little does she know, Zash plucked her out of obscurity with ulterior motives. Despite the prejudice of Harkun, her Sith Overseer on Korriban, Valerija excelled at her trials, managing to tap into both the Dark and the Light to accomplish the tasks set out for her.

Force Lightning the primary visual effect of Sorceror abilities, is supposedly only available to adherents of the Dark Side. But, of course, the game mechanics allow for a purely Light Sith, which is the direction I've taken Valerija. Hence her ability to tap into both Sides.

After having been through the first part of the Inquisitor story with Tollkirsche (below), I thought it would be funny if the Inquisitor actually looked like the NPC, Lord Zash. At the same time, I have in the past tended to go with the Female Body 2 (Athletic) but was "admiring" the the curvier Body 4. So I designed her by following Zash's appearance, then changing the body and complexion slightly, making Valerija a softer, curvier version of the Sith Lord. Though not visible here, Valerija wears trousers rather than the tradition robes of a Sorceror. 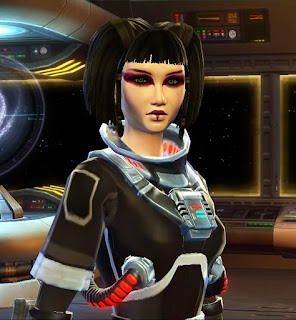 Human, Sith Marauder
"Let me show you the true nature of the Force."

Her name is the Genus for a South American plant commonly called Strangler Vine.

A member of a Noble House of Naboo, Morrenia was identified as a Force sensitive by agents of the Sith and recruited by overseer Tremel in a powerplay against Darth Baras. Accustomed to privilege and adept in the Force, she took her training and the carefully arranged trials for granted, and is not particularly disciplined. Her tendency toward sardonic quips is the cause of great consternation on the part of her new Master; though it amuses Morrenia's slave, Vette, at least as long as her biting wit isn't directed at the Twi'lek treasure hunter. Her slight form belies Morrenia's vicious skills in lightsaber combat. Wielding a blade in each hand, she pounces on her enemies with little warning, cutting them far deeper with the plasma than with even her rapier tongue.

Morrenia is the culmination of a sort of fascination I have with this character model: Body 1 (thin), Asian physiognomy, striking purple make-up. She is the third such figure, the first being Heliantha, a dark Jedi Consular I started in order to re-familiarize myself with that story, with the intent to continue my Sage, now named Rowanblaze (more about her later, too), who is about to depart Coruscant. I cheated a little, this portrait is actually of that character. The second Kabuki-esque Heliantha was/is a Sith Marauder on Begeren Colony that I started on Saturday afternoon. But Scooter, understandably, wanted to continue to build her Legacy on The Ebon Hawk, so I went ahead and started over there. As I had already named a character Heliantha, I searched for another name that I liked and had some meaning. With Morrenia, I made her as pale as I could, so she really does look like she could be on stage in Tokyo, or at home among the courtiers of Naboo. 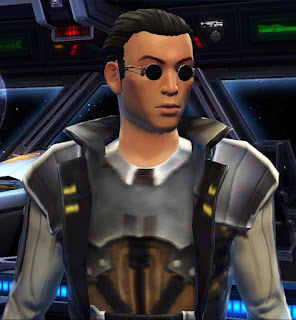 Cyborg, Imperial Operative
"In my experience, there's no such thing as luck."

German for "covert" or "hidden" (sort of pronounced fur-SHTEKT)

Gideon Sho is a cipher agent with Imperial Intelligence, known as "Versteckt." He is also a mole from the Imperial Mercenary Corps (my original guild), a group of anarchist pirates descended from Revan's original army, who settled on a moon that now falls within Imperial space. While playing the part of a loyal spy, Versteckt attempts to subvert Imperial policy at every opportunity—letting dissidents and enemies of the Empire escape to the Republic, secretly sabotaging the war effort on Balmorra, etc. Not that Versteckt is a friend of the Republic by any means, he has no compunction about killing Reps, Gangsters, or anyone else who gets in his way. On the other hand, he is not a walking bloodbath, if there is a way to get what he wants by persuasion—or seduction—Versteckt will take that option.

My original idea for his name was "Cypher," but that was unavailable for reasons that will be apparent to anyone who has run through the Agent storyline. Versteckt was the only character I got to max level during our first run in SWTOR. I always liked the slick, debonair look he has, I simply had to make hime a cyborg just for those shades. He is still at 50, because Scooter and I haven't picked him or her Bounty Hunter back up since returning. I also find it a little odd that his shirt is a little "blurry" no matter what quality my graphics are set to. Sadly, my original guild didn't really survive the big server merger of 2012 and the naming chaos that followed. 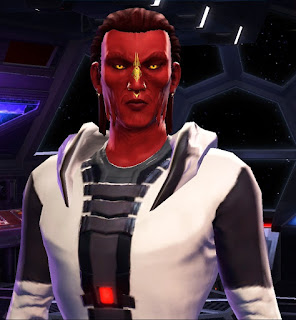 
Pureblood, Sith Assassin
"I find your lack of faith disturbing."

A former slave who has shown tremendous Force potential, Lord Tollkirsche is the former apprentice of the late Darth Zash. Though Pureblood, his origins are actually somewhat obscure, nothing is known of him prior to his appearance on the slave markets of Zygerria. Personality profile indicates an off-balance individual who sadistically delights in the suffering of others; though he shows compassion and a feral sense of justice on random occasions. Tollkisrche is another link to Revan; he was observed making several trips to the Revanite camp outside Kaas City, before departing the system on an errand for his master. It is debatable whether he can be trusted by the Dark Council. However, like a Kaas electrical storm, Tollkirsche is becoming a force to be reckoned with.

Tollkirsche was my wildcard back when I played before. I turned off the Light/Dark indicators and just chose what I wanted to do with worrying about the points. I also ended up doing a lot of the space fighter games with him. While upon my recent return, I finished up the second chapter of Tollkirsche's story, I haven't really played since, and my only interest in doing so is to unlock Pureblood for use on the Republic side for Jedi.

As I have indicated, this is maybe half my roster, the rest I have played barely or not at all since returning to SWTOR. As long-time readers know, I put a lot of time into coming up with names that are unique and have symbolic meaning in some way. I hope you've enjoyed this little review.
~~~

This work is licensed under a Creative Commons Attribution NonCommercial ShareAlike 3.0 Unported License. If you are reading this post through RSS or Atom feed—especially more than a couple hours after publication—I encourage you to visit the actual page, as I often make refinements after the fact. The mobile version also loses some of the original character of the piece due to simplified formatting.
From the mind of rowanblaze at 9:00 AM