Syp brought up an interesting topic this week that I have touched upon myself on occasion. The question of how separated is he from his characters in games. 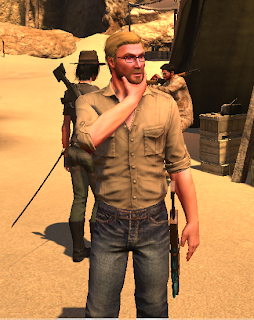 Though this may be part of what he intended in his second position, I think there is a third option: That the character is essentially a creation of the developers, and I am merely following it through the world. That third option may be more valid in certain single player games than in MMOs. I know that Bhagpuss has expressed this point of view about his characters, as has Tyler Edwards.

Echoing what Ettesiun wrote in commentary on Syp's post, I think that, without a backstory, an MMO character is literally just an avatar of the player, regardless of the appearance or gender of the character. Even when the player does something through the avatar that the player would not do in real life, it's still the player making the decision. Oftimes, the themeparks gives little choice beyond taking or refusing to take a given quest. Other, more sandboxy MMOs, may have so little story to them that the players must either create the fictions or simply play as themselves.

I tend to develop, at the very least, vague backstories for my characters, and they end up making decision I would not necessarily make. On the other hand, they tend to be amplified versions of me, again, regardless of their gender. Like Syp, I have a propensity for playing females.

SWTOR offers some variation in the manner of accomplishing a quest, but in the end, they feel even more on rails in many ways, because my characters often say things that don't quite match up with what I interpreted the dialogue choices to mean. Every once in a while, I back out of a conversation and start over because the dialogue is so egregiously out of character.

TSW gives my character no opportunity for dialogue at all during the cut scenes. (Then again, neither did WoW when I played, or many others.) But it is precisely those games that I do the most character development in. Dr. Samantha "Lonestarbelle" Hawthorn has an extensive background. Achillea Sunsage, my Trooper in SWTOR, has virtually no background at all.

So, in the end, I tend toward the second option Syp gave. I develop my characters within the framework of the game world. They have personalities of their own, but there is a lot of overlap with mine. How consistent am I in that? I'm not sure, But I am not as concerned about it as Syp apparently is.

How about you? What is your relationship to the characters you play in MMOs?
~~~

This work is licensed under a Creative Commons Attribution NonCommercial ShareAlike 3.0 Unported License. If you are reading this post through RSS or Atom feed—especially more than a couple hours after publication—I encourage you to visit the actual page, as I often make refinements after the fact. The mobile version also loses some of the original character of the piece due to simplified formatting.
From the mind of rowanblaze at 8:30 AM

Email ThisBlogThis!Share to TwitterShare to FacebookShare to Pinterest
This ramble relates to: Game Mechanics, MMOs, Roleplaying