PvE and PvP Are Not Like Chocolate and Peanut Butter

EDIT: I'm putting this here because there seems to be a slight misunderstanding amongst my readers. I'm not saying in this post that PvP and PvE should never mix. I am referring to special short time events—like The Secret World Anniversary Event currently going on through the 15th of this month—that cause a lot of players who would not otherwise involve themselves in PvP to flood a PvP zone—Fusang in this case—in order to fulfill some PvE objective.

An interesting series of discussions has arisen surrounding the Guardian of Gaia in Fusang Projects.

It turns out one of the fight mechanics involves the Guardian healing itself from an AoE attack, and few if any players in Klaus' fight group understood how to counter it. It probably didn't help that that PvPers continued to go about their business of killing other players.


Even in the area where we're fighting the golem people are still killing other factions. Do they not understand that we're supposed to work together on this - this one time????
~~a BtV castmate

Meanwhile Skye Harris of the TSW community on Google+ has a different perspective:


[I]t's full of PvE players expecting a PvE fight . . . whinging in chat that they were killed by other players (it IS a PvP zone after all). . . Personally though, I cannot wait till this ill-though-out event is over and Fusang is rid of people who want to camp a PvP zone without actually PvP'ing.
~~from comments to my post on G+

I find myself agreeing somewhat with the sentiments of both PvPers and PvEers. I only want to get the Lore object to complete the achievement. I could care less about a 4-hour lagfest where I'm hindering and being hindered by other players, as well. 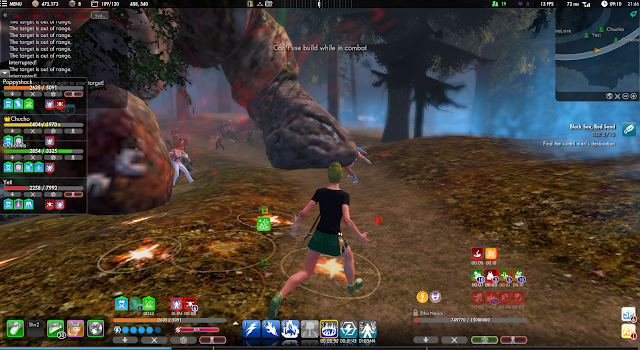 "Gee, I'd like to have a major PvE event in the middle of a PvP battlezone," said no MMO player ever. It's always a mistake for the devs to insert a special PvE event into a PvP zone. You please no one. Looking at you this time, Funcom. Live and learn, as they say. But PvP and PvE do not taste great together.
From the mind of rowanblaze at 9:20 AM

Email ThisBlogThis!Share to TwitterShare to FacebookShare to Pinterest
This ramble relates to: Beyond the Veil, Celebration, Community, controversy, Devs, Funcom, MMOs, PvP, Quote of the Day, TSW