My enthusiasm this morning is entirely fictitious, as I am suffering from a terrible headache, no doubt brought on by an excess of blood in my coffee system. Apparently, I am not the only one suffering slightly from a Rift hangover.

Here, we have Achillea (formerly known as Rowan, center) dancing on the bar of House Stalwart's Merry Gallows Tavern with fellow druid (cleric) Jessmyn (a.k.a the lovely Lady Jess). Wow, a lot of parentheticals in there. 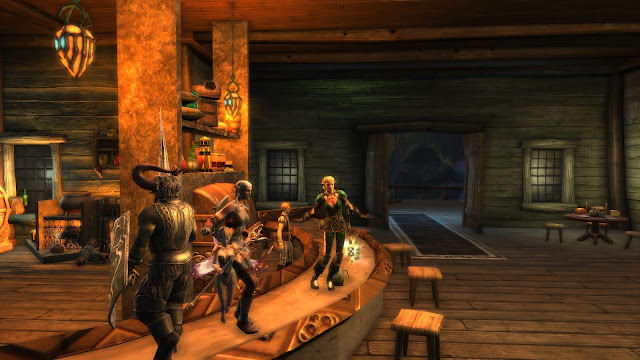 So Rift went free-to-play a month or so ago, and while it was only mildly interesting news to me at the time, when Belghast strong-armed invited me and Scooterz to join him and some old friends from the meta-guild House Stalwart, we decided to get our feet wet. For the past week or so, I have watched somewhat from the sidelines as the guild has grown from just few people to over 35, many (most?)—like us—returning after a long hiatus, a few veterans, and a few newbies to the game. I gather the game is not as friendly to said newbies as I would have expected, though our return has been fairly seamless.

I spent most of my week messing around with dimensions, rather than questing or leveling. I'll have more on that later, partly because my dumb ass did not take pictures of my new work-in-progress. Well, I thought I had, but there were none in my screenshots folder.

In the meantime, Summerfest has started, with fun quests, scavenger hunts, etc. And this guy, strummin' some hot licks on his air guitar. 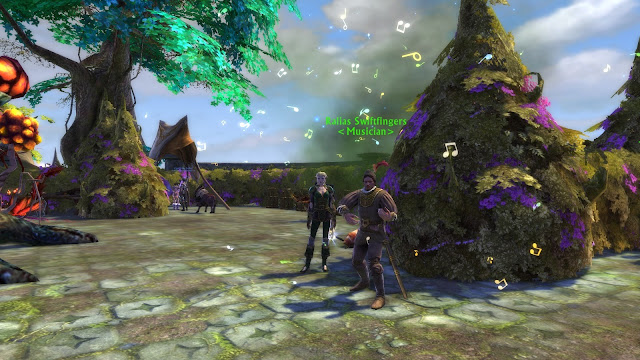 This is a nice milestone: as of this morning (maybe last night), this month is the third in a row as my best for visits to the blog not attributable to a single whale of a post. Things are only getting' better.
From the mind of rowanblaze at 10:06 AM

Email ThisBlogThis!Share to TwitterShare to FacebookShare to Pinterest
This ramble relates to: House Stalwart, milestone, Pic of the Day, Rift, Trion Worlds