All the Galaxy's a Stage (Part the Second)

So I ended up with far fewer characters on this second round than I had thought (here's the first round if you're just joining us). I've been shuffling some characters around, and now I'll need to make at least one more post. After dwelling on the females in the first part, I shamefully failed to mention that my (as of now) highest characters, Tollkirsche and Versteckt, are Male Body 2, the stud—I so want to name all the body types now. Let's see: 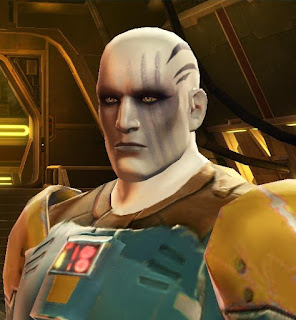 Rattataki, Bounty Hunter (Powertech)
"I made a pile of bodies, then I walked over it."

Named for several different plants. The Texas Silverleaf is perhaps the most apropos, given here I personally live and my SWTOR legacy.

Xuxuy Tesig is a Rattataki warrior and champion gladiator who spent time as a mercenary before being discovered and recruited by the bounty hunter Braden into a team trying to get into the Mandalorian Great Hunt. Claiming that all the best hunters had nicknames, Braden's dataslicer, Mako, gave Tesig the appellation "Silverleaf." His facial scar is the result of an almost disastrous fight with a nexu in The Cauldron on Rattatak. The nexu's hide now decorates Silverleaf's quarters on his pirated D5-Mantis, dubbed the Wayfarer—again by Mako.

I started Silverleaf to run with Scooter's Agent, Ginie, which she had to start the other evening while an incomplete download prevented playing anything but a new character. Partly because we are only following the stories, I have quickly become attached to this very new character. 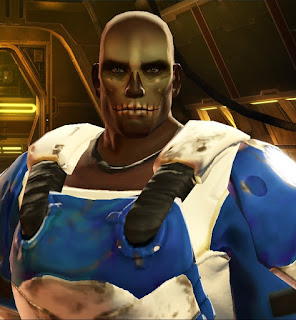 German = Willows, also the the name of a town I visited several times while staying in Germany a few years ago.

One of my original characters, Weiden has been on hiatus—stuck on Balmorra—for ages. I loved the idea of the skull facepaint on his dark skin. I'd thought to pick him back up when I got to the right place in the story with Silverleaf, but Scooter likes him better, plus it would create different group dynamic since Scooter's Agent, is a healing Operative.
~~~~~~~~

If you're interested in joining the madness (Vloggers are welcome, too!), Belghast has a set of rules for qualifying for any prizes at the end. Your second stop should be the Blaugust Nook, where Bel is keeping track of everything and community members are sharing encouragement and ideas.
~~~~~~~~

This work is licensed under a Creative Commons Attribution NonCommercial ShareAlike 3.0 Unported License. If you are reading this post through RSS or Atom feed—especially more than a couple hours after publication—I encourage you to visit the actual page, as I often make refinements after the fact. The mobile version also loses some of the original character of the piece due to simplified formatting.
From the mind of rowanblaze at 8:50 PM